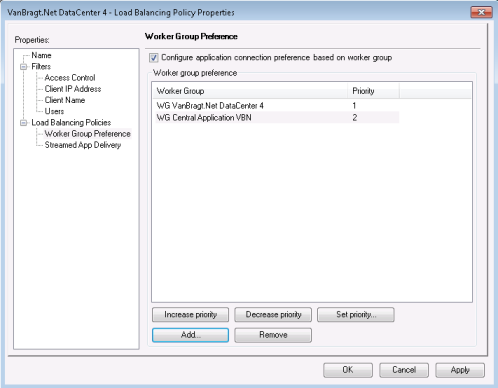 This scenario is pretty comparable with the first one. The customer has several locations where Load Balancing was used to redirect the user to his own data center where his back-end systems were located. Just as above some applications were offered from the main data center. Different was that the customer would like to see that those applications were started on the same systems as the Desktop was offered for the user from the main data center (so a single image) and the server should both hosting the Published Desktop as the Published Applications. However they stated before if there are no resources available within the data center of that user, the user should not be forwarded for a Desktop session in another data center (it was just sized for the amount of users per location). We tried to figure it out if this was possible. The actual question was if the worker groups were just used to define which servers could be used or that the actually worker group is also used to check if the Desktop/Application is published on this worker group. 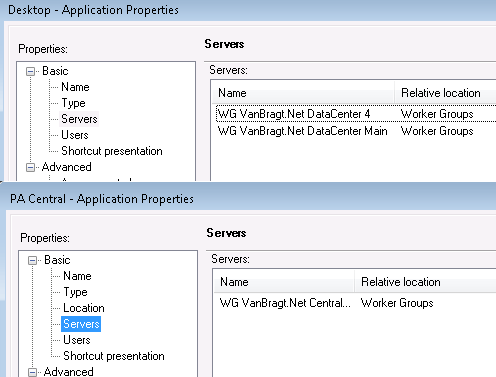 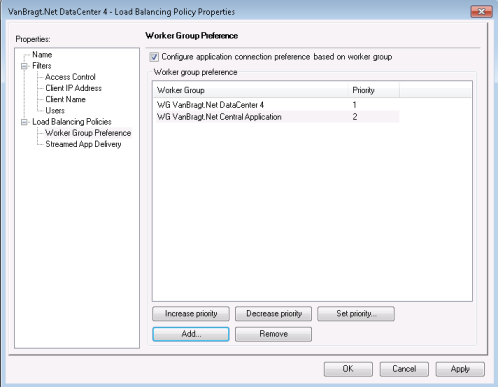 With this set-up the question was what will happen if no servers in WG VanBragt.Net DataCenter 4 are available and a user of that Data Center will start the Published Desktop.

And the results are………. the Published Desktop will start on one of the server defined in the WG VanBragt.Net Central Application as those servers are both hosting the Published Desktop as the Published Application. During the Load Balancing process only the servers are determined that could be used for assigning a session to the user. It’s not used to see if the Published Resource is actually assigned to that Worker Group. In this case this solution does not meet the requirements for this customer. Because in this way the user will get a Desktop session in another datacenter (I know you can discuss this requirement, but that’s another story).

For this case you should create a separate image for central applications hosted on other Citrix XenApp Sessions Host.