From Friday the 10th of June till Sunday the 12th of June E2EVC Berlin was taken place. My first in-person event abroad after the COVID period. It was good to see that lots of people were there again. My experiences of day one is in this blog, the second day will follow shortly.

I arrived with train to Berlin. First time I traveled by train and it was nice experience to travel, especially the last part with the ICE. The event hotel (where I'm not staying) is really nice, both the view from outside as it has a real conference center with nice rooms.

As a tradition the event started late ;-) where Alex has a short introduction as he always says and talks a lot after that. After the introduction and the first alcohol drinks already going round it was time for Eugen Kalayev from ControlUp. Eugene told why ControlUp 'loves' E2EVC and the growth of the company. Eugene was showing the console explaining all the systems they are supporting in the product (focusing on End User Experience and Digital Experience). He showed the actions part and continued with the PowerShell module they have introduced to have access to the data gathered by ControlUp. He showed the release note page to show how much features they are introducing in each release and showed some of them like the new PVS metrics, improved community scripts action engine and solve (the new web based console based on a SaaS service). Eugene ended the session with Scoutbees their user logon simulation product and Edge DX (monitoring physical devices) which will include Teams monitoring soon. 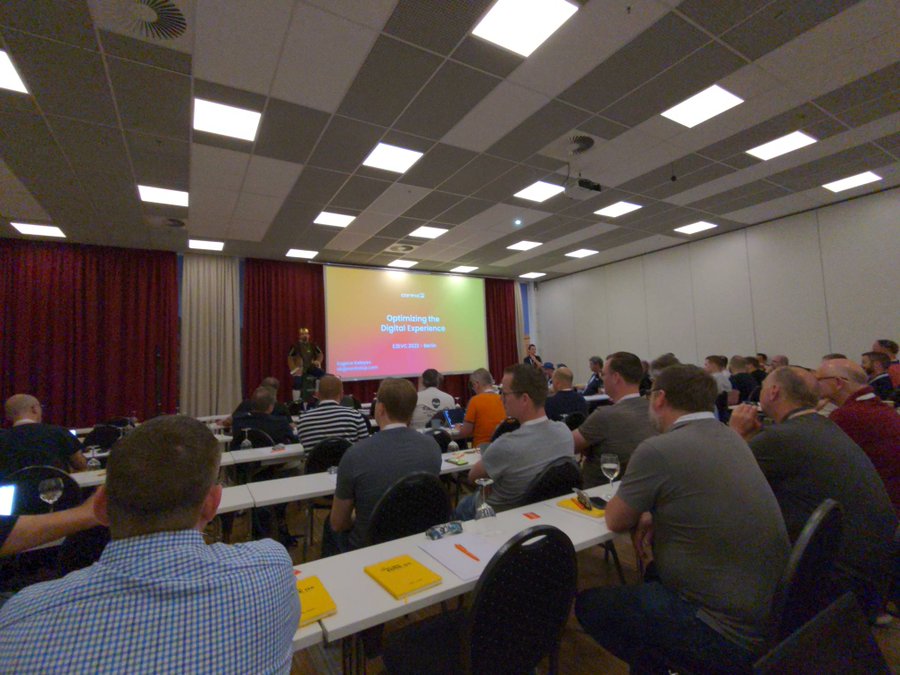 Carl Webster was the next presenter around FlexxDesktop. He started with the introduction of the company Flexxible IT and the introduction of the FlexDesktop (uncomplicate Hybrid Workspaces). Carl was actually only providing the introduction and gave quickly the word to Manuel Pérez and Jesus Sánchez. Manuel deep-dived in more detail on the FlexxWorkspaces (single pane of console - helpdesk, uses session shadowing, azure cost savings, multi-description, multi-tenant management, customer operations/remedation, monitoring). The product uses Azure IoT Hub and Azure Service Hub, no direct communication. There were some questions what the product actually does. If I took it correctly, they provide a kind of management layer above the VDI solutions (like Citrix Cloud and AVD) both on deployment as maintenance. But I must admit that it is still not 100% sure, as later some parts made it a bit unclear again for me. Jesus took over and discussed the product using a live demo of the management console. Next topics were Power Management Policies, Shrink Disk feature, The session ended with the roadmap (API rest, FlexxAgent for Android and Mac, Native Integrations /w Windows 365, Amazon Workspace, VMware Hoirzon, Simplied initial deployment, more Azure cost savings optimalizations).

Helge Klein was next with uberAgent. He started with explaining what the product does: performance monitoring, security analytics for native and web apps both on physical as virtual devices both local and network activity. After mentioning the advantages of uberAgent Timm Brochhaus continued with the enhancements made for Citrix monitoring (ICA Roundtrip time, Virtual Channels data) showing the data in their console via several views like the Experience Score Overview, the Citrix Session Protocol Insights, Citrix Session Configuration Details. Good enhancements to the product with some interesting features with much of details. I personally really like the session state changes (including data) insights.

Next session by Nico showing Liquit product. Nico started with describing the product and the company. After the quick introduction Nico continued with What's New: Universal Agent for macOS and VMware Horizon Connector. What Liquit is actually doing was the next topic (universal front-end, unified application/deployment management, keeping your apps up-to-date). Nico demo'ed the product showing the capabilities of the product.

The day continued with the EUC Score - New User Experience Benchmarking Tools and Results by Benny Tritsch. Benny started explaining how the EUC Score product works, followed by a quick overview of the toolset and the simulation gallery. He continued with explaining running the simulations and tests. Benny had run several scenarios based on several products and services (like Azure, Parallels and VMware) and showing the results. Benny last topic was what's next: new type 1/type 2 simloads, type 3 simloads, rating model with scored based on capabilities, experience and performance, image quality assessment for scoring screen video, add Citrix session IDs to telemetry collector configuration and planned avator + controller.

Next session was Igor van der Burgh with an update on Citrix Cloud. He started with discussing the CVAD 2203 LTSR release and the highlights between the 1912 and 2203 release: HDX Enhancements (Drag/Drop, Oauth redirection, teams optimizations). Next topic was Cloud Service Updates: VDA Upgrade service, Cloud Connector Enhanced Health Checks, Rendezvous v2, new WEM console, configuration partitions, Custom Admin Banner. Igor touched the Resource Location Limitations, followed by the Secure Private Access solutions (should support client server app and IP Port Groups as well + internal web apps, SaaS apps). Also several Azure enhancements were mentioned by Igor (AD joined VDAs, Optimization Pack for Azure, non-domain joined VDAs). He continued with Citrix PVS on Azure, which is NOT a Citrix Cloud service (it's just running PVS on a Cloud service). There is pretty large list of limitations, so definitely check those if you are considering using PVS on Azure. Image Portability and his current state were discussed as a last topic.

How Open Source Changed The Way We Work by Sinisa Sokolic was the next session I attended. He started with describing the characteristics of Open Source, followed by going some open source projects, challenges and becoming a software developer instead of infrastructure engineer (use git, agile project management methodologies, manage devops pipeline, resolve merge conflicts, get used to IDEs, branching strategies, check pull request). Finally this led to Xoap, a SaaS console to 'solve' the challenges (code abstraction, simple to use wizards). Sinisa continued with describing the functionalities within Xoap: Image Management (based on Packer), Platform Management (based on Terraform), Configuration Management (based on PowerShell DSC) and Application Management (PSADT).

Barry Schiffer was next with the session What's up at eG. He introduced the team of eG in EMEA and explained how monitoring of the Digital Workspace is done by eG. Next topic was Domain Expertise and how they are being developed by eG (now 250+ components are capable being monitored by eG). eG is converging IT infrastructure monitoring and application performance monitoring in one salutation and combining the data into one view. Barry discussed features like the Service topologies and Logon Simulation (now including MFA), followed by the eG Enterprise architecture. The session ended with a demo based on the Service Topologies.

Last session of day 1 was by Christiaan Brinkhoff with the session the Future of End User Computing with Windows 365 Cloud PC. The vision of MS around Windows 365 is 'loved by users' and 'trusted by IT'. Next topic was describing where Windows 365 (Secure work on personal PC's, onboard/offboard employees, simple to buy/deploy/employees, on top of AVD) and AVD (shift on-prem VDI to the Cloud, leverage existing VDI infra/expertise, enable Remote App/non-persistent desktops). Christiaan showed the welcome screen from both solutions (Windows 365 / AVD) are different. Next topic was the differences between Windows 365 business (simple onboarding, no license prerequisites, small businesses) and Windows 365 Enterprise (deploy/manage via Endpoint Manager, region specific deployments, choice of MSFT gallery image or customer-provided image, unlimited number of users). He showed the process of setting-up the Windows 365 Cloud PC. Next topic was multi-media redirection, followed by Windows Autopatch (service engineered by MS to optimize Windows and Office update deployments) and announcing Citrix/Microsoft partnership around Windows 365 (it is using the Citrix Control Plane, but the management is done via the MS Endpoint Manager, so no Studio/Director). Next Christiaan discussed quickly Windows 365 Boot, Windows 365 Switch, Windows 365 Offline (vision, not something that will be shipped soon) and Windows 365 App (replacement for the Remote App).