In the earlier article series Failover (im)possibilities I wrote about the failover/load balancing possibilities in XenDesktop 7.x, where part 3 was about what is available in XenDesktop 7.7. In this article I will discuss the XenDesktop 7.9 release (and corresponding the 7.8 release when this applies) and will also go into a bit more detail what is expected in future releases (where possible).

As written in part 1 we already discussed the importance of the Citrix XenDesktop Site database in the XenDesktop/XenApp 7.6 and earlier released. In 7.6 Connection Leasing was introduced that partly fills in the current need for the well-known XenApp 6.5 Local Host Cache functionality. In the article I mentioned that in the Technology Preview no changes or enhancements were available for the Connection Leasing part.

Both in XenDesktop 7.8 and 7.9 this is still the case. Connection Leasing is still implemented in the same way as in XenDesktop 7.6 including the same limitations. But there is probably good news for the future. First it were only rumors, but Citrix now mentioned in one of the Citrix Synergy 2016 Break Out session that Local Host Cache will be brought back in a future release of XenDesktop. Hopefully this will become available in the Q3 2016 release (the name is not announced yet, can be become 7.10 or 8.0 or even another name).

With the Release of XenDesktop 7.9 StoreFront 3.6 became available. The StoreFront 3.6 release has several smaller enhancements. Not on load balancing/failover specific, but high on many wishlist is the possibility to install StoreFront on a non-domain joined machine. For load balancing users to farms a new option is available where load balancing can be used over non-identical farms when using multi-site configurations.

Release XenDesktop 7.7 was for this topic a bit disappointing. The GUI Options shown in the XenDesktop AppDisk Preview were not available in the 7.7 final release. In 7.7 Zones were introduced, which could also be a way for failover possibilities for the Published Desktops and Apps, but Citrix mentioned Zones had a phased approach. The first phase did not include anything for failovers. The Zones were focusing on regulating the traffic between the VDAs and the Delivery Controllers (see part 3 for more information and/or in the next paragraph of this article).

However in XenDesktop 7.8 the GUI options became available exactly in the same way as shown in the Technology Preview. In other words the PowerShell command for the applications is now available out of the console. You can configure a Published Application with multiple Delivery Groups and specify the priority to which Delivery Groups the users should be redirected. This is good enough for an active-standby set-up. For an active-active set-up with Published Applications you should still need to use a workaround by publishing the same application twice with another name. 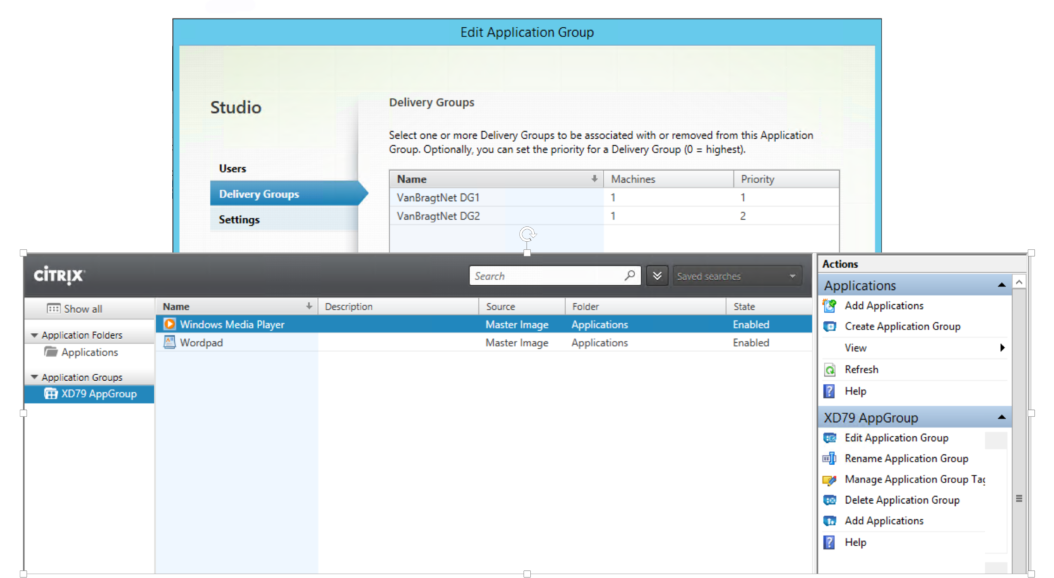 During Citrix Synergy 2016 BreakOut SYN108 there was a slide for the future which looks like we will get more possibilities, but more about that in the next paragraph.

Pretty unexpected Citrix re-introduces zones in XenDesktop 7.7. They mentioned that they were using a phase approach. In XenDesktop 7.7 they introduced the zones for controlling/regulating the communication between the VDAs and the Delivery Controller. So you can arrange that a VDA only communicates with a subset of the Delivery Controllers, which are both assigned to the same zone (based on the Machine Catalog the VDA belongs).

Both XenDesktop 7.8 as 7.9 did not bring new functionality to the zones functionality. Although we hoped that zones could bring back failover possibilities to Published Applications and Published Desktops.

At Citrix Synergy 2016 during break-out session SYN108 on a slide of future enhancements the functionality Zone Preferences was mentioned. Zone Preferences that sounds familiar isn’t it? In Presentation Server 4.x Zone Preferences were available/used to set-up failover possibilities to Published Applications/Desktops. This sounds that one my guesses earlier that zones would bring functionality we would like to see (see part 2) can be become reality. Hopefully this will also be added to the next release scheduled for Q3 2016.

Together with XenDesktop 7.7 Provisioning Services 7.7 is also released. I already described in part 2 that the Technology Previews of PVS 7.7 did not show any enhancements on load balancing. As expected the final release does not contain any enhancements. The current load balancing is sufficient for most of the use cases and therefore it’s logical that my thinking caps are not high on the list of possible features.

However the announcements at Citrix Synergy that Local Host Cache and Zone Preferences will make a come-back is really good news on the failover part. We need to wait how and when it will be available. So expect another article in this series when those features are available within the product.