In the earlier article series Failover (im)possibilities I wrote down how fail-over could be done in the past (aka as the XenXApp 6.5 era), how it’s currently can be done (and what’s missing in comparison with the past) in XenDesktop 7.5/7.6, the near future based on current available Technology Previews (XenDesktop 7.7) and enhancements that Citrix could make in our vision. On 28 December 2015 Citrix released the XenDesktop/XenApp release. In this article I’m taking a look if the features available in the used Technology Preview are available/implemented as expected. Secondly I’m describing the (im)possibilities of the Zones feature that was mentioned about a month ago, which was not available in the (public) Technology Previews.

When Bas (van Kaam) and I were creating the presentation of the XenDesktop Failover (im)possibilities for E2EVC Lisbon out of the blue Citrix release the StoreFront 3.1 Technology Preview. In this release our thinking cap options were almost fulfilled. As Bas explained (see part 1 for the details) that Technology Preview does not include all steps in the GUI, but would probably be added to the final releases. Although it would be nice if this next StoreFront version was released with XenDesktop 7.7, this was not expected. Those expectations were right, XenDesktop 7.7 is shipped with StoreFront 3.0.1. The version number is a bit higher 3.0.1.55 to 3.0.1.57, but probably this is just a small bugfix as I don’t see any differences between those versions. 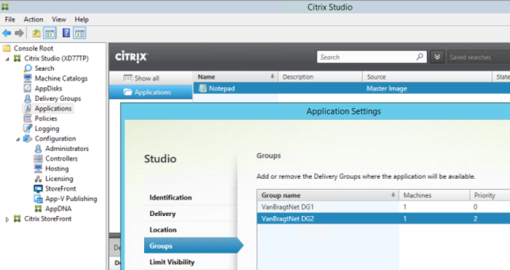 Also the possibility to create multiple Desktops within one Delivery Group via the GUI did not make it.

What does this mean for the failover possibilities? That nothing is changed for this part in comparison with XenDesktop 7.6. For Application you can still use the PowerShell command for failover set-ups. For an active active set-up you need to use the multi-site configuration. For Desktops there is still only the multi-site configuration, within one site there are no possibilities. You can still use the multiple Delivery Groups options for failover as a kind of work around. For that option there is an enhancement mainly on maintenance and traffic passing the WAN with the re-introduced zones.

And that brings us to a new (re-introduced) features in XenDesktop 7.7. A bit out of the blue Citrix mentioned that Zones will come back, unfortunate without detailed information. Now the release is available we can see what Zones brings us. Citrix states clearly that the Zones features is a multi-phased approach, which means that not all functionality is available in this first version. So more is coming.

I think it’s a good to do a quick look back to the Zones in previous XenApp released. In the early days when the product was called Presentation Server zones had two functionalities:

In the XenApp 6.x version the last functionality was moved to Worker Groups in combination with Load Balancing. In those version Zones were only used to limit communication of the servers between multiple locations.

Taking a look to XenDesktop 7.6 both these functionalities are missing. About the failover Application Desktops was the main topic of this article series. We touched the traffic slightly at the database part. Zones in XenDesktop 7.7 could bring back both functionalities and limiting the traffic. It looks like Citrix is aiming for both as some sentences in this explanation article are mentioning fail over possibilities.

With the current Zones implementation this behavior can be regulated. Each XenDesktop Site exists of a primary site. It sound logical but the primary site should host the database and would normally have all components available (license server, delivery controller, storefront and so on). For the actual Zone functionality you can do additional configurations for the machine catalog, delivery controller and the hosting connections. Beside the primary zone, you can create one or more zones. To a zone you can add machine catalog(s), delivery controllers and the hosting connections. You can add all three or only one. For this release you can use the zones to arrange that a VDA always connect to the Delivery Controller(s) at the same location (read configured within the same zone).

This a good addition to the XenDesktop product, it makes it easier to set-up a fail-over location where the communication between the VDA and Delivery Controller can be controlled within a location.

I see also lots of possibilities to extend the zone functionality. It sounds more than logical that this functionality can be used to set-up failover possibilities within one site both for Desktops as Applications. Hopefully Citrix is thinking of such additions in the multi-phase approach.

Together with XenDesktop 7.7 Provisioning Services 7.7 is also released. I already described in part 2 that the Technology Previews of PVS 7.7 did not show any enhancements on load balancing. As expected the final release does not contain any enhancements. The current load balancing is sufficient for most of the use cases and therefore it’s logical that my thinking caps are not high on the list of possible features.

In this additional third article in the series about Citrix XenDesktop Failover (im)possibilities I took a look back at the first two articles and what is actually made it to the final release of XenDesktop 7.7 (as first two were based on Technology Previews). I really regret that the GUI enhancements for Applications Fail Over did not make it to this release, as those were low hanging fruits in my opinion. Further the release offers the expected functionalities as shown (or not shown) in the Technology Previews.

Everyone was curious was the Zone feature would bring. In potential this could be a powerful feature that brings back a couple of functionalities that are high on the wanted (to have back) feature list. In this current release the functionality is limited to shaping traffic between the Delivery Controller and the VDAs, but as Citrix is stating this is just phase one.