After the sessions on the first day we had a dinner together at the event location and after that I  [ ... ] 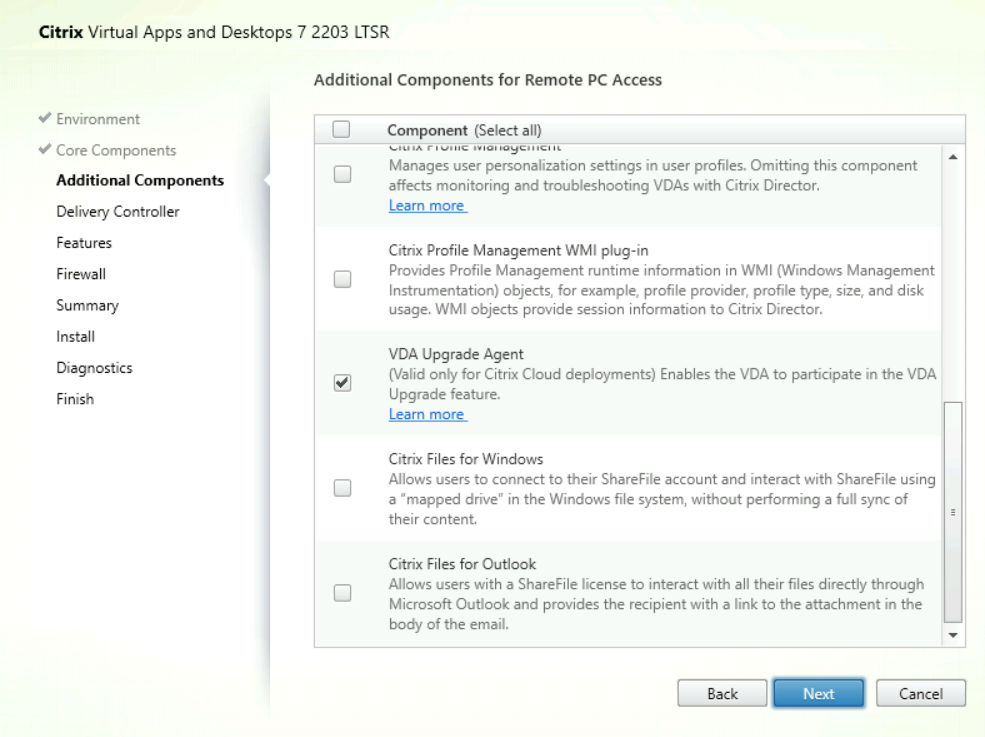 During the installation of the VDA software at the additional components the VDA Upgrade Agent needs to be selected. In other words if you already have a running environment with a VDA without the Upgrade Agent enabled (or a VDA version that does not contain that agent) you can not use the functionality directly. 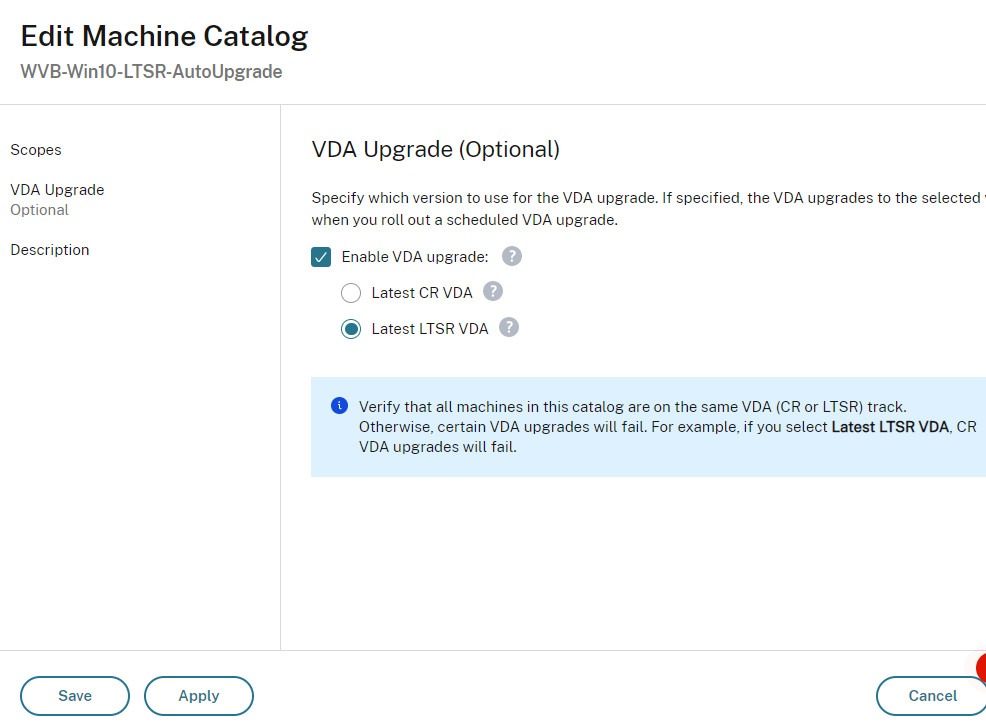 As shown in the above image you need to select which track the Machine Catalog will follow the Long Term Service Release (LTSR) track or the Current Release (CR) track for the upgrades of the VDA. 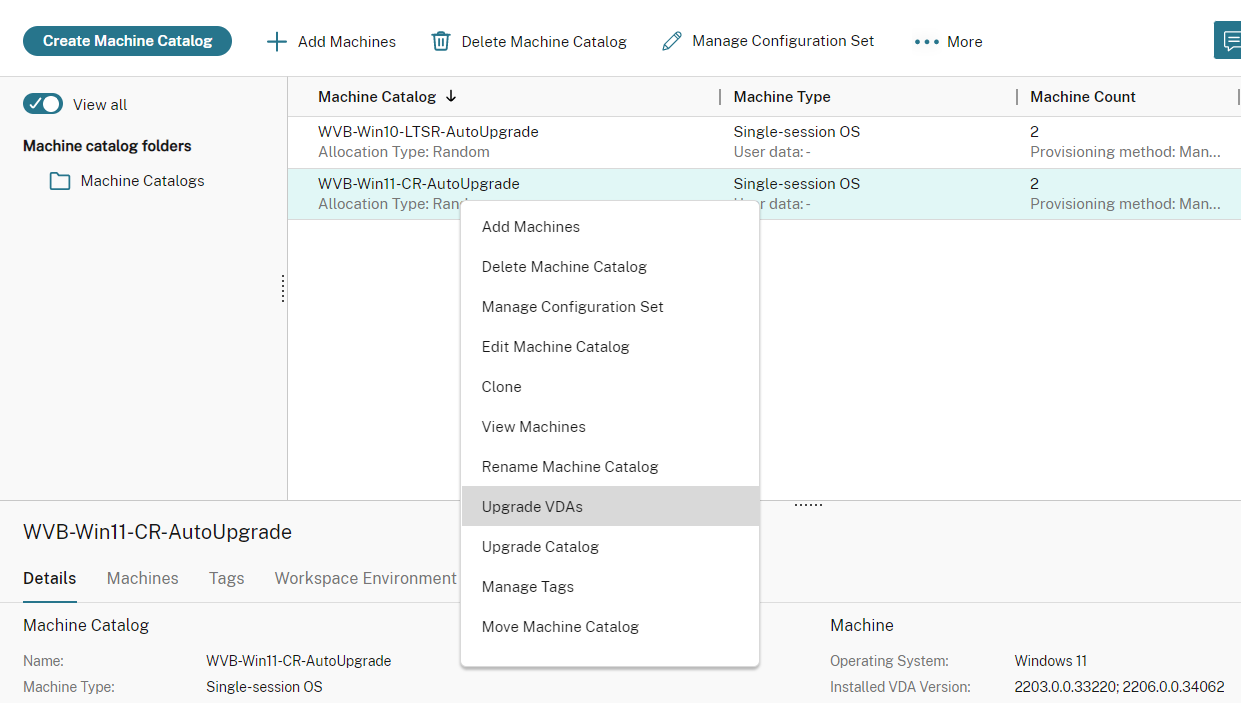 In my environment it took a pretty long time before the Upgrade VDA functionality appeared in the context menu. This is caused that the VDA upgrade status on the VDA is not know yet. There is new column available in the view VDA Upgrade status to see the current status on a VDA level. As long as the status is unknown the Upgrade feature is (logically) not available. It looks like this check is done periodically as when I restarted the VDA Upgrade service the status is reflected shortly after the restart of the service. 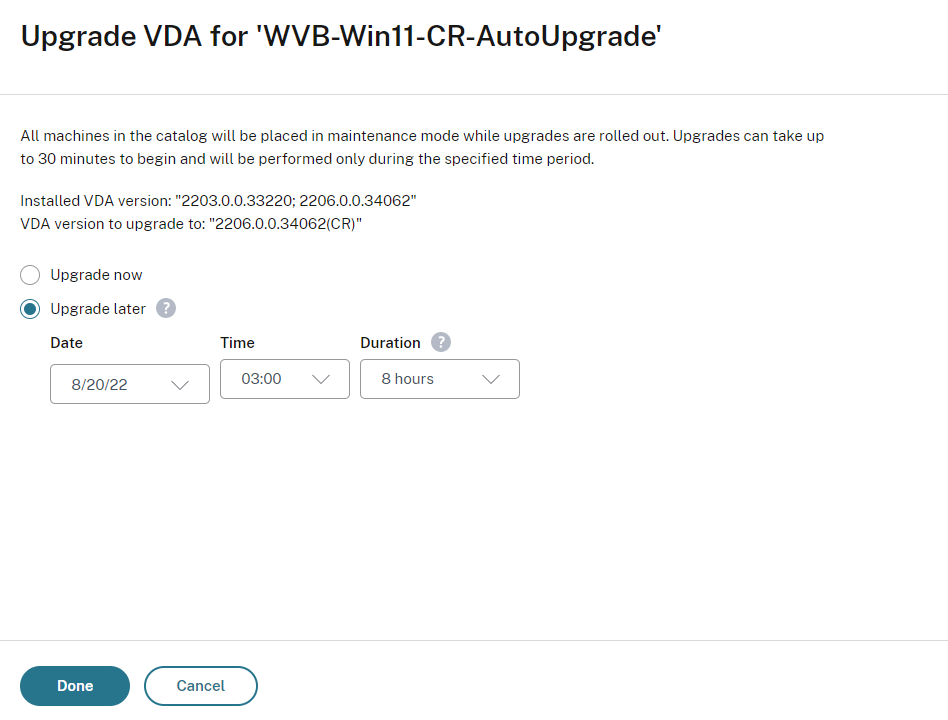 Last thing to keep in mind that the upgrade process will only start on VDIs that are NOT in maintenance mode or NOT have an active session running. Personally it would prefer an option to override both options as there are companies that persons still will be working on VDA (while you announced a maintenance mode). Of course a notification to the end user should be send in that case including a time interval to save and close his work.

As already mentioned quickly after the VDA upgrade is scheduled you can cancel it, but also adjust the schedule via the option Edit VDA Upgrade. The same configuration settings can be made as during the initial schedule. 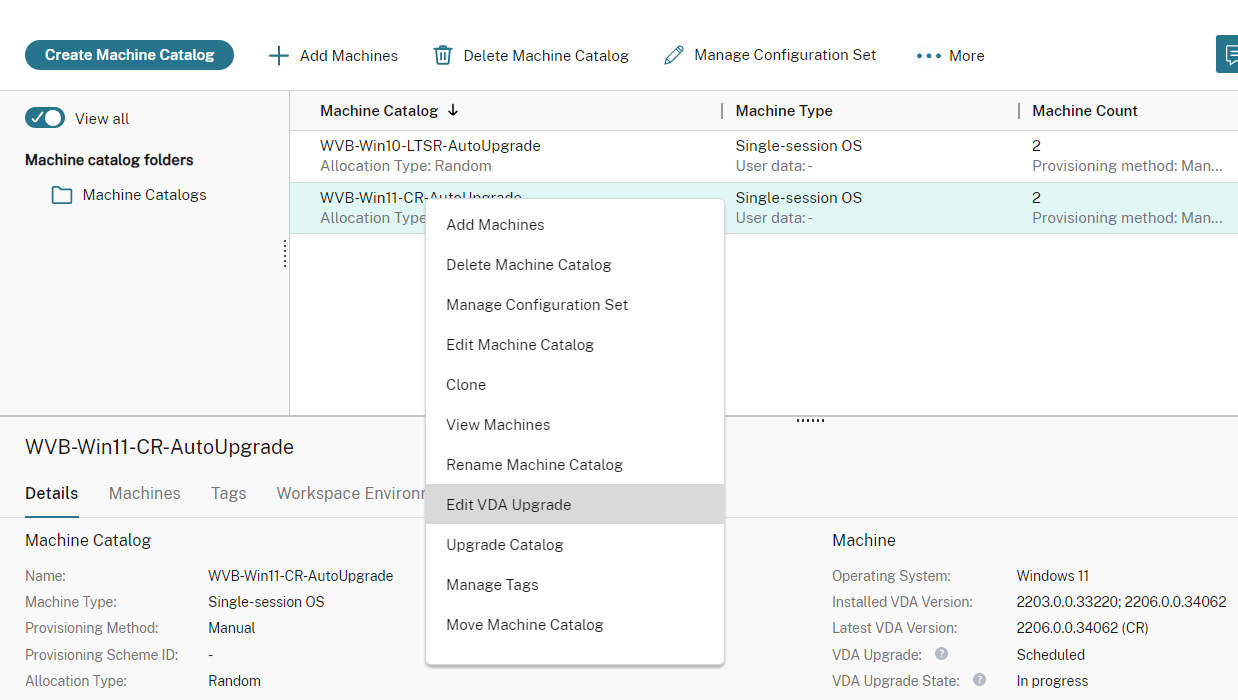 After the initiation by a direct upgrade or when the schedule time have been reached the update process will be started. The VDAs part of the upgrade process will be placed in maintenance mode. The progress is shown globally both on VDA level as Machine Catalog level. Progress levels are scheduled, awaiting upgrade, in progress, successful or failed. An example of the status on Machine Catalog level is shown in the above image (bottom right).

For a per VDA status you need to add a column in the view of the management console, labeled VDA Upgrade status as shown in the above image. I think the status is a bit to global, would be nice if some more detailed information is available, especially when the process is not successfully. The following screenshot shows an example of a failed upgrade with the available information. More detailed information why the process is failing, is necessary in my opinion for actually start troubleshooting the issue.

In my demo environment after several attempts the upgrade process is not taking place at all. It is continuously timing out, both on CR and LTSR tracks and several machines. In all tests only a time-out message was shown (which does not make clear what actually was happening). I also did a quick check on the VDA, but I could not find anything related the VDA Upgrade process in the event log. I heard the suggestion that a CDFtrace is probably needed for troubleshooting at this moment.

The lack of information available caused that I needed to reach out to Citrix connections indirectly via slacks and a request on Twitter. The people who responded were really willing to help, but till now nobody could really help me. It looks like that even within Citrix not much information/knowledge is available on this feature. For now I assume it is something special within my environment and at the end the feature is working (which I heard from at least one person).

During the writing of the article I found some particularities in the feature at this moment. Of course it is in public preview so maybe the behavior will not be available in the final solution.

The idea and concept of the VDA upgrade process arranged via the Citrix stack is really nice. The current implementation has some limitations, which can be a show-stopper for customers to really use the feature. Especially the available information on the progress and issues, should be extended in my opinion. Also the support of CU versions for the LTSR track should be part of the offering. Hopefully Citrix will be enhancing the feature in the near feature to make it more attractive to more customers.